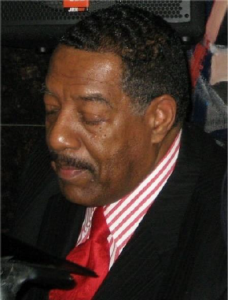 In 1967 Louie’s singing group “The Soul Meditations” (At Jack Yates High School) was the first local group to record for Skipper Lee Frazier, the manager of Archie Bell and the Drells. In the summer of 1968, Louie was part of the house band at Ray Barnett*s Cinder Club in Houston for six weeks. During that summer he backed Lou Rawls, The Platters, Johnny Taylor, Bobby Bland and many more. The Groovy Grill was owned by Louie’s relatives and was the hang out for many of these artists. In 1971 he received his B.A in Music from Huston-Tillotson University. In 1973 Mildred Jones (formerly with BB King) became his mentor. He has produced more than 9 albums and CD’s (Jazz and Gospel) for himself and other musicians. Since 1981 Louie has done 6 major concerts at his church (Trinity East) and 5 major concerts and workshops at Huston-Tillotson University.

In 1985 Louie began touring Europe for 16 years. His tours included Germany, Holland, Norway Switzerland, Casablanca Morocco, Belgium and The Cayman Islands. He has opened shows for Nina Simon, Betty Carter and Michelle Legrand. He has sat in with jazz greats including Dizzy Gillespie, Cannonball Adderley, Kirk Whalum, Johnny Nash and Roberta Flack. In Austin (1999) Louie was inducted into the Carver Library “Texas Hall of Fame” along with The Gray Ghost (Blues Guitarist), Dooley Wilson (Sam in Casablanca) and the late Barry White from Galveston. His most recent special engagements have been at the Wortham Theater performing for the after party of “Three Mo Tenors”, The Carver Center in San Antonio and Jazz at Saint James in Austin with his Trio. He was voted number one for live entertainment in Houston by Fearless Critic Magazine for 2009 and 2010. Last year, Grammy Award-winning vocalist Steve Tyrell sat in with Louie at Tony’s. Louie performs at Tony’s nightly. Archie Bell performing with Louie in November of 2019 as a special guest. Louie is also a former Trustee of Huston-Tillotson University in Austin, Texas.